Is this the end of the USA as a superpower?

"Please ignore all references to the USA" appears on all Tilda "Original America" rice packs in shops in L’Angleterre. Rumours that the company will soon stick "Please dump American dollar" on all rice packs sold outside the USA is unfounded though. "This has to do with GMO," says the shopkeeper, "not USD".

Here’s the label at close quarter: 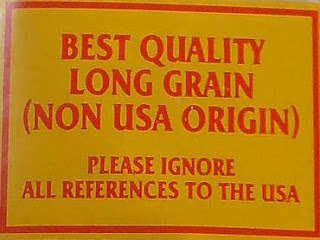 They say that when a bomb so powerful pounds human flesh and blood, the shadows of dead souls are embedded in the walls around the place where the human flesh and blood are so mightily incinerated. Such shadows exist in the aftermath of Hiroshima, and shadows of women and children are imprinted on the walls of the Amiriyya bomb shelter in Baghdad. 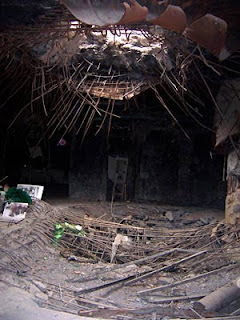 Fifteen years ago today, two US “smart” bombs hit the civilian bomb shelter in an attack on Iraq that is now known as the first Gulf War. The first bomb punched a hole in the reinforced concrete ceiling of the shelter. Some accounts say it was ten feet thick. Following swiftly in the path of the first one, a second bomb wheezed in through the hole, exploding amidst women and children huddled together in this place that they they thought was safe from the pandemonium that was building up outside. Just minutes before they had heard a wheezing sound, and then, everything was light and fury. And their bodies melted and their bones rattled and burnt, and their shadows clung to the walls.

This was the first light of freedom coming down on the people of Iraq. First the tyranny of Saddam Hussein, then the white heat and showers of democracy coming down on their heads. For most of these innocent Iraqis: women young and old, children clinging to their mothers, there were no heads left, nor bodies nor hope. They were incinerated into dust, all 408 of them, the biggest single incident of civilian casualty in modern warfare.

Oh, there were a handful of survivors who walked out of that hell all dazed and mad. A few are in asylums, a few still gazing blankly into this distant hell, hearing the sounds of sons and daughters wailing then silenced by the call of the night time bombers just before democracy arrived at their door.

It was called the Amiriyya civilian shelter. Fifteen years ago, today. Remember it now.

"Tel Rumeida is a small Palestinian neighborhood deep in the West Bank city of Hebron. Palestinian families from whom these settlers occupied lands, live directly next to these settlers and are often virtual prisoners in their homes, subject to the settlers' violent attacks and destruction of property."
ß

"Are YOU an anti-Semite? Do you know someone who is? Take this simple test and find out. Don't be surprised if you discover some painful truths about yourself and your country.

1. Abraham was the Biblical ancestor of Arabs and Jews. Thus, logically, each group should be treated equally and with respect. True or false? If you answered True, you are anti-Semitic because you hate the Jews.

2. The US foreign policy favors Israel and punishes her enemies. True or false? If you answered True you are obviously anti-Semitic.

3. The Federal Reserve Bank, which controls US money and thus controls America, is based in London, England and is headed by Jewish peoples. True or false? If you answered False, you are not necessarily anti-Semitic but simply uninformed.

4. Many powerful US Congressmen, senators and representatives, whether Republican or Democrat, travel to Israel but never travel to Iran or Syria on all-expenses-paid fact-finding missions, thus their bias towards Israel and against Iran. True or false? If you answered True, you know your current events but probably have anti-Semitic tendencies.

5. Many powerful Hollywood moviemakers are Jewish. Thus almost all movie villains (Nazis, Muslims, Islamic terrorists, Catholic pedophiles) are enemies of Jews---but never, ever are Jewish people portrayed as evil. True or false? If you answered True you hate the Jews and are anti-Semitic.

6. Jews are among the best and worst people in the world. But Jews enjoy far more influence and positions of power, relative to their numbers, than any other comparable group of people in the US. True or false? If you answered True you are a neo-Nazi skinhead AND an anti-Semite.

7. Jewish people enjoy high places of power in the US government and media, but many of them also hold foreign passports for Israel. Doesn't that create problems of loyalty? True or false? If you answered True, you obviously hate America and side with the Arab terrorist--or perhaps you are an Al Qaeda member and should be imprisoned.

Now read the rest of the article HERE

Bomb Them Happy In the Meantime

It is a wonder of our age that the moment the US or its allies or proxies start bombarding dissident troublemakers, up fly an array of passports and identity papers to show that these are the terrorists that they've been looking for in connection with this or that. And then out comes a video with some bearded loon declaring Jihad against all manner of isms. But then we mustn't underestimate the powers of precision bombing.

So it is now the turn of the Somalis to be branded al-Qaeda terrorists, and who has been enlisted in this fight against the new terrorists? Why, step forward the man with the tinpot hat Meles Zenawi of Ethiopia, as corrupt as any dictator can be but ever willing to bomb any number of peasants in those arid lands of Somalia for a barrel of dollars or two. In the meantime, with bodies torn asunder and homes ravaged and burnt, where are those turbaned terrorists and their precious passports? Why, they're still holding on to them of course, just in case they're needed when they cross the border into a neighbouring state where they will continue to fight.

I told you these men are dangerous, so the US and the Ethiopians and the Israelis even will have to stay the while in Somalia just in case they return.

Meantime, Somali warlord Abdullahi Yusuf has declared that the US the right to bomb anyone. Or something to that effect.

Abdullahi Yusuf? Hmm, er yes, he was once the warlord in that humiliating Black Hawk Down incident in Somalia wasn't he, killed US soldiers and dragged their bodies across town? But he may be a sonofabitch, but he's our sonofabitch now.

Let's recap why the Islamists were so popular in Somalia in spite of what you've read or heard in the media. They brought order to the land torn apart by the corruption of greedy warlords like Yusuf and put a stop to those nefarious activities of those brigands. But being Islamists of course that's a bad name, but they're Muslims in Somalia, and if the Somalians wish to be ruled by men with turbans and are happy with them surely it's their business for goodness' sake. But the popularity of these men were a threat to the States, and Ethiopia, and everyone else in the coalition against this kind of thing because Islam equals terrorism, don't you understand?

It's interesting: a nation that's occupying a large tract of Somalia, the Ogaden, is now there in Mogadishu as a liberating force. And in the meanwhile those Eritreans are still smarting from the liberating force of Ethiopians in recent times. So there's a new chapter there in the deserts, be on the lookout then for those video productions on al-Jazeera which is the coalition of the righteous' main medium of instruction.

Bomb Them Happy In the Meantime

We shall not name names but the alliance of the steadfast is slowly crumbling but no, not to fizzle out but to come out again to wage new wars in a new cocked hat. So hands up now those who thought it right to invade Iraq? Even now Kofi Annan is now saying that life was much better under Saddam.

But to be fair, they didn't attack Iraq because the standard of living there was harsh. They attacked because of Iraq's weapons of mass destruction (WMDs) that the Iraqis are now still hiding in a remarkable feat of camouflage. And we did tremble at the thought of it once, didn't we, when Blair (among others) declared that Iraq could produce their WMDs from their flat packs and assemble to attack Britain or its parts within 45 minutes.

Becket is the most unlikely figure as Foreign Secretary as there can be: a caravanning women and steadfast Blairite with only one weapon in her armoury, loyalty. Don't laugh because in these days when former Blairite Babes and Neophyte men who once were tumbilng over one another to kiss the Boss's ar..er, hands are now keeping their distance, Becket is still a staunch follower of the Vicar Blair.

Hear now what she said in an interview on the Today programme with John Humphrys:

"That [the WMD threat] was a statement that was made once and it was thought to be of such little relevance, and perhaps people began quickly to think, "I'm not sure about that", that it was never used once in all the debates in the House of Commons."

And then again when asked why a public statement was never made about its irrelevance by Blair or anyone in Government, she dismissed it thus:

"Oh, come on, nobody thought it was a big sweeping statement."

This is what Blair said in his introduction to the UK government's assessment of WMDs, released in the build-up to the invasion (to keep you all wporked up) by Downing Street:

"Its work, like the material it analyses, is largely secret. It is unprecedented for the Government to publish this kind of document. But in light of the debate about Iraq and Weapons of Mass Destruction (WMD), I wanted to share with the British public the reasons why I believe this issue to be a current and serious threat to the UK national interest.

"In recent months, I have been increasingly alarmed by the evidence from inside Iraq that despite sanctions, despite the damage done to his capability in the past, despite the UN Security Council Resolutions expressly outlawing it, and despite his denials, Saddam Hussein is continuing to develop WMD, and with them the ability to inflict real damage upon the region, and the stability of the world.

"...I believe that faced with the information available to me, the UK Government has been right to support the demands that this issue be confronted and dealt with. We must ensure that he does not get to use the weapons he has, or get hold of the weapons he wants."
— Source:Downing Street

And then go here now to see who else thought that WMDs were of sweeping importance.

So Farewell Then, Allende 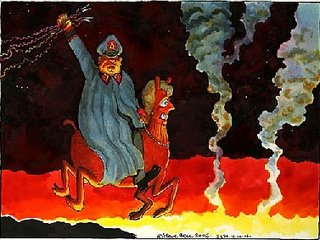 General Pinochet at the Bookstore

The general's limo parked at the corner of San Diego street
and his bodyguards escorted him to the bookstore
called La Oportunidad, so he could browse
for rare works of history.

There were no bloody fingerprints left on the pages.
No books turned to ash at his touch.
He did not track the soil of mass graves on his shoes,
nor did his eyes glow red with a demon's heat.

Worse: His hands were scrubbed, and his eyes were blue,
and the dementia that raged in his head like a demon,
making the general's trial impossible, had disappeared.

Desaparecido: like thousands dead but not dead,
as the crowd reminded the general,
gathered outside the bookstore to jeer
when he scurried away with his bodyguards,
so much smaller in person.

— Martin Espada, in The Republic of Poetry
Santiago, Chile, July 2004

So Farewell Then, Allende

Go To The Wall